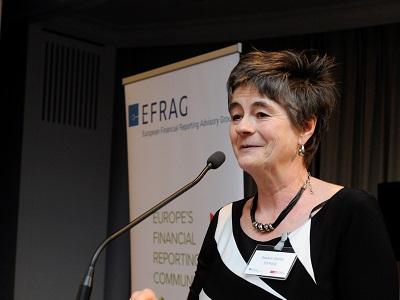 Saskia Slomp has been appointed EFRAG CEO from 1 April 2019.

She has been Governance and Admin Director at EFRAG from 1 January 2010 until 31 March 2019. In this role, she supported the various governance bodies of EFRAG and was responsible for the user activities and outreach events, in addition to her responsibilities for human resources.

Until the end of 2009, she was Technical Director at FEE (now Accountancy Europe), one of the founding member organisations of EFRAG. She has been involved in EFRAG since its establishment. Within Accountancy Europe, she was responsible for financial reporting, company law, corporate governance, capital markets, SMEs, sustainability reporting and assurance and the public sector. In the beginning of her career, she worked with KPMG in The Netherlands.

Saskia is a member of the Dutch NBA.