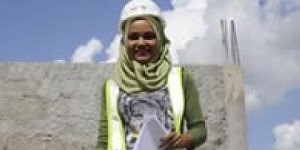 The founder of ConsMoz Ltd., a construction company based in Nampula, northern Mozambique, won the UNCTAD Empretec Women in Business Gold Award for her commitment to quality, sustainability and environmental protection – as well as for her pioneering leadership in a traditionally male-led sector – in Geneva, Switzerland on 25 October.

Civil engineer Uneiza Ali Issufo founded ConsMoz after finding it difficult to get ahead in the construction companies she had been working for, despite being president of her local contractors’ association. After participating in an Empretec entrepreneurship training workshop in 2017, the MBA graduate was able to expand her business so that it now employs 800 women and men and lands large building contracts demanding top quality and green credentials.

“Taking risk is my natural way of being,” Ms. Issufo said of her entrepreneurial zeal. “You cannot discover the oceans unless you dare to lose sight of the pier.”

Ms. Issufo received her gold award from UNCTAD Secretary-General Mukhisa Kituyi and Francesca Lavazza, board member of the Lavazza Group, along with the winners of silver, bronze, export potential and special recognition awards, at a gala ceremony during the World Investment Forum 2018 in the historic Assembly Hall of the Palais des Nations in Geneva.

The Empretec Women in Business Awards are given to women-owned businesses that have benefited from the business development services of the Empretec entrepreneurship programme, which marks its 30th anniversary this year.

In line with the theme of this year's World Investment Forum – “Investing in Sustainable development” - the 2018 awards were given for the crucial role that women's entrepreneurship and empowerment plays in the 2030 Agenda for Sustainable Development.

The ceremony provided an opportunity to showcase the Empretec programme and Women in Business Awards finalists to World Investment Forum delegates, impact investors, enterprise networks, and representatives from civil society and the private sector.

What the judges said: Awarded for courage and audacity as a woman starting a green construction business, and her systematic and ongoing efforts to grow her business in innovative ways, creating employment opportunities for local communities particularly women.

What the judges said: Awarded for her perseverance and focus on robotics and digital education for children, especially girls, and her systematic efforts to grow her business through partnerships.

What the judges said: Awarded for her perseverance in providing holistic education for children, especially girls and those with special needs, and her efforts to continuously grow her business and create employment opportunities.

What the judges said: Awarded to the company with the most export potential in regional and global markets. Ouseuse’s collections have already made their appearance on international catwalks in Lisbon, Paris and New York.

What the judges said: Awarded to the company that has worked toward activating and enabling women and girls by developing their skills.

Ten finalists, announced in July, were selected for innovation, leadership and impact on their communities by a panel of experts. They were chosen from more than 50 nominations submitted by Empretec centres in 19 countries.

UNCTAD’s Empretec programme has trained and motivated more than 400,000 entrepreneurs in more than 40 countries since it launched in 1988.

Previous winners of the Empretec Women in Business Awards include:

The 2018 awards ceremony was livestreamed on Facebook and can be viewed here.