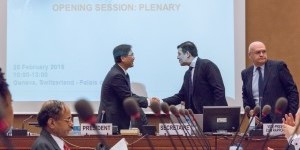 More than 300 representatives from governments, the private sector, civil society and academia convened in Geneva for three days on 25-27 February to consider ways to improve the international investment policy regime.

The meeting aimed to expand and deepen the multi-stakeholder discussions on reform of international investment agreements (IIAs), which were initiated at UNCTAD’s 2014 World Investment Forum. At that time, countries expressed a broad agreement on the need to rebalance the IIA system in a way that would strengthen countries’ right to regulate, foster responsible business conduct and improve international investment dispute settlement.

Meeting participants worked in small groups to identify possible solutions in various challenging areas. The discussions centred around four broad themes: the substantive content of IIAs; the sustainable development dimension of IIAs; tools for modernizing IIA networks; and investment dispute settlement. The conclusions of these break-out sessions were then debated in plenary sessions.

Experts appreciated this innovative format that allowed for collective brainstorming. “It gave us a lot interesting ideas to take back to India,” said Dr. Ishita Tripathy from India’s Ministry of Finance. “UNCTAD has moved the debate on IIA reform to a new level,” said Rebecca Varghese-Buchholz fromTraidcraft, an NGO active in the field. Shaun Donnelly from the US Council for International Business said he had appreciated the opportunity “to explain the business community’s views on the importance of IIAs and of investment as tools to promote economic growth, jobs, and sustainable development”.

One of the issues where consensus appears to be particularly difficult is reform of investor-State dispute settlement (ISDS). While representatives of business associations argued that the system is generally working well (although selective improvements could be made), some civil-society groups called for terminating all treaties that provide for ISDS.

Experts noted the need for more applied research for future courses of action. Professor Stephan Schill of the University of Amsterdam noted that “issues raised are very complex; they require pragmatic and fact-based analysis, to which academia can provide a valuable contribution.” To facilitate the channelling of academic findings into policy-making processes, UNCTAD established a special repository for IIA reform options.

Some countries, including Brazil, India and Indonesia, used this opportunity to present their new model investment agreements that depart from traditional IIA models. Renato Souza from the Brazilian Ministry of Development, Industry and Foreign Trade introduced the country’s “entirely new model of investment agreement that focuses on pragmatic investment facilitation obligations rather than ‘expensive’ and frequently ineffective arbitration clauses.”

Several experts from the European Union took part in the meeting. “Given that the Commission has already taken steps to address some issues in its negotiated agreements and the fact that this topic is gaining prominence in the EU, we are glad to be part of UNCTAD’s discussions,” said Colin Brown from the European Commission’s Directorate-General for Trade.

There is a huge inherent challenge in attempting to come up with a comprehensive and coordinated plan for reforming the IIA regime, as fragmented as it is. Many stakeholders called upon UNCTAD to continue serving a multilateral platform for IIA reform efforts.

“This event might be the beginning of a process for years to come. It does not matter how slowly you go as long as you do not stop. The challenges related to the IIA reform are significant but not insurmountable, and with UNCTAD’s help countries are starting to tackle them,” concluded the meeting chairman, Ahmed Shehabeldin of Egypt.

More information regarding trends and reform of the IIA regime and a database with the IIA texts can be found on UNCTAD’s Investment Policy Hub.