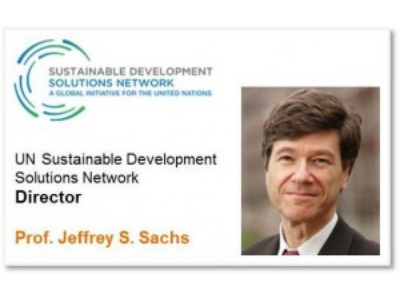 Professor Jeffrey D. Sachs is the Director of The Earth Institute, Quetelet Professor of Sustainable Development, and Professor of Health Policy and Management at Columbia University. He is Special Advisor to United Nations Secretary-General Ban Ki-moon on the Millennium Development Goals, having held the same position under former UN Secretary-General Kofi Annan. He is Director of the UN Sustainable Development Solutions Network. He is co-founder and Chief Strategist of Millennium Promise Alliance, and is director of the Millennium Villages Project. Sachs is also one of the Secretary-General’s MDG Advocates, and a Commissioner of the ITU/UNESCO Broadband Commission for Development. He has authored three New York Times bestsellers in the past seven years: The End of Poverty (2005), Common Wealth: Economics for a Crowded Planet (2008), and The Price of Civilization (2011). His most recent book is To Move the World: JFK's Quest for Peace (2013). Professor Sachs is widely considered to be one of the world’s leading experts on economic development and the fight against poverty. His work on ending poverty, promoting economic growth, fighting hunger and disease, and promoting sustainable environmental practices, has taken him to more than 125 countries with more than 90 percent of the world’s population. For more than a quarter century he has advised dozens of heads of state and governments on economic strategy, in the Americas, Europe, Asia, Africa, and the Middle East. Sachs is the recipient of many awards and honors, including membership in the Institute of Medicine, the American Academy of Arts and Sciences, Harvard Society of Fellows, and the Fellows of the World Econometric Society. He has received more than 20 honorary degrees, and many awards and honors around the world. Professor Sachs is also a frequent contributor to major publications such as the Financial Times of London, the International Herald Tribune, Scientific American, and Time magazine. Prior to joining Columbia, Sachs spent over twenty years at Harvard University, most recently as Director of the Center for International Development and the Galen L. Stone Professor of International Trade. A native of Detroit, Michigan, Sachs received his B.A., M.A., and Ph.D. degrees at Harvard.