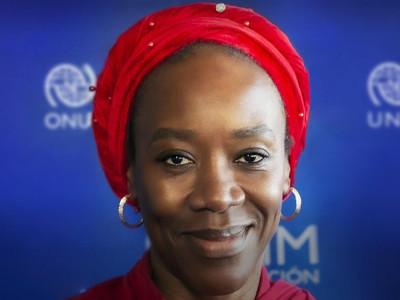 On 31 May 2021, Ugochi Daniels was appointed as IOM’s Deputy Director General – Operations, taking office on 1 September 2021.

Ugochi Daniels is a Senior Executive with over twenty-seven years of diverse managerial experience with donor and United Nations entities, academia, as well as private sector institutions.

Ugochi Daniels was named a (S)hero of the United Nations for championing women’s health needs in humanitarian emergencies. (S)heroes defend the vulnerable and fight for human rights, command forces and build coalitions for peace and take on the world’s toughest challenges.

She is proud to be part of a global community that builds partnerships for peace and development to solve global problems. She is an advocate for justice, equality and equity and believes in the importance of identity and being fully grounded in community. She has a strong passion for advocacy and funding for the specific needs of women and girls especially in humanitarian settings.

Ugochi Daniels’s career with the United Nations spans almost two decades. Prior to joining IOM, Ugochi Daniels was the Chief of Staff at the United Nations Relief and Works Agency for Palestine Refugees (UNRWA) covering Jordan, Lebanon, Syria and the Occupied Palestinian Territory. She was also the United Nations Resident Coordinator and Designated Official for Security in the Islamic Republic of Iran from 2018 to 2020. From 2013 to 2018, Ugochi Daniels was the Chief of Humanitarian and Fragile Contexts Branch at the United Nations Population Fund (UNFPA) Headquarters covering over seventy countries where UNFPA was responding to emergencies. Her stint at UNFPA includes assignments in the Philippines (Country Representative, 2010-2013) and Nepal (Deputy Representative, 2007-2010). Ms Daniels joined the UNFPA in 2002 as the Deputy Program Manager for Africa Youth Alliance (2002-2007) covering Ghana, Tanzania, Botswana and Uganda.

Prior to joining the UN, Ms. Daniels was the Monitoring and Evaluation Information Specialist of the United States Agency for International Development (USAID) Mission in Nigeria from 1999 – 2002. Ms Daniels also has private sector experience, having worked in the information technology, manufacturing and financial services industries from 1992-1999.

Ugochi Daniels has Bachelor and Master’s degrees in Geography, and holds a Post-graduate Diploma in Information Management for Business Decisions.  She is also a Microsoft Certified Systems Engineer.

She is married with one daughter and two sons.