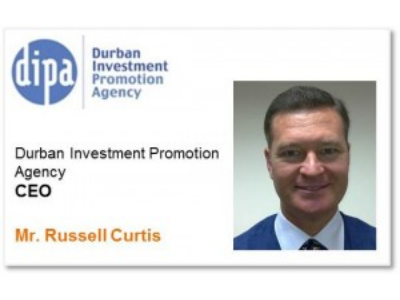 Mr. Russell Curtis is currently in charge of the Durban Investment Promotion Authority, South Africa. For the past nine years, he has been a Board Member of the Durban Chamber of Commerce, and he is the immediate past Chairman of the Institute of Directors, KZN. He is also a Founding Board Member of the KZN Sustainable Energy Forum (KSEF). Previously Mr. Curtis served on the Editorial Board of The Mercury, Independent Newspapers Group. Mr. Curtis participated in the United Nations Investment Advisory Council 2008/9 and as a Panelist at the World Investment Forum 2010. Mr. Curtis has also served on the Earth Institute MCI and the World Bank Expert Advisory Group on City Investment Promotion. Mr. Curtis holds the degree of Chartered Associate, Institute of Bankers SA, corporate banking and financial services experience in the United States of America and South Africa. He was elected as Chairman of The Institute of Bankers in KZN for three years. Business and industrial engagements also extend into the Exco of the Durban Automotive Cluster, and the Advisory Board of University of KZN, Graduate School of Business. During 2006 to 2009, he was a Member of The City of Durban’s Strategic Management Exco., plus a Work Stream Leader in the 2010 FIFA World Cup Host City Team. Mr. Curtis holds several post-graduate Diplomas in Financial Management, Project Management, Corporate Finance, and Securities Brokerage (US SEC), plus Executive Certificates in Strategic Investment Promotion, Advanced Financial Modeling and others. He also holds a Post Graduate Degree in Business Administration.