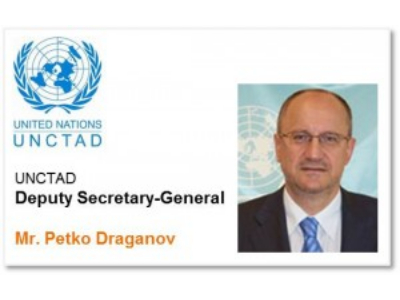 Mr. Petko Draganov assumed his functions as Deputy Secretary-General of UNCTAD on 1 May 2009. As Deputy Secretary-General, he has helped spearhead UNCTAD’s communications strategy and publications policy, streamline management, and enhance interagency collaboration and technical cooperation activities. He received his MA in International Law at the Moscow State Institute for International Relations. Mr. Draganov began his diplomatic career in the Information Department of the Bulgarian Ministry of Foreign Affairs. From 1985 to 1998 he worked largely on African affairs, serving in the Bulgarian embassies in Ghana and Zimbabwe and in the African Department of the Foreign Ministry. From 1993 to 1998 he was Ambassador to South Africa, Namibia and Botswana. In 1998, Mr. Draganov was appointed Permanent Representative of Bulgaria to the United Nations and Other International Organizations in Geneva. He served as President of the Conference on Disarmament from August to December 2000. From 2001 to 2005, Mr. Draganov held the position of First Deputy Minister of Foreign Affairs of Bulgaria. He was in charge of multilateral diplomacy development, disarmament and European integration issues. He also served as Chairman of the National Commission on UNESCO, Alternate Representative of the Republic of Bulgaria to the United Nations Security Council, and Special Representative of the Chairman-in-Office of the Organization for Security and Cooperation in Europe (OSCE) to the Republic of Moldova. Mr. Draganov served a second term as Bulgaria’s Permanent Representative in Geneva from 2005 to 2008. In 2008, he was President of UNCTAD’s Trade and Development Board. In that capacity, he contributed to the successful outcome of the Accra Conference, as Chair of the UNCTAD XII Preparatory Committee and the Committee of the Whole

Investing in the Future
Statement