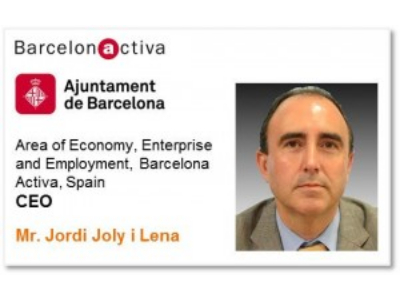 Mr. Jordi Joly i Lena is the CEO of Economy and Finance of the Barcelona City Council, as well as Executive Vice President of Barcelona Activa, which is a public company owned by Barcelona City Hall for economy development execution, labour policies and services, entrepreneurship, and business attention. He is also Vice-President of MERCABARNA, board member of the Investment Committee of the Insitut Catalá de Finances, and Chair of the CEFG, European City Economy and Financial Governance Group, which promotes new trends of management and finance harmonization throughout main European cities, Hamburg, London, Milan, Dublin, and Vienna, together with the European Commission / Eurostat, the European Institute of Public Administration (EIPA), the Lisbon Council, and the European Centre for Government Transformation. Mr. Joly i Lena’s prior experience includes working as Consultancy Director for Europe, Middle East, and Africa, for PALLADIUM, Inc., and serving as DeputyMayor for Economy, Finance, and Economic Development for Sant Cugat del Vallès (Barcelona). Mr. Joly i Lena is a Political Sciences graduate of the National Spanish Educational Insitute and obtained an Executive Master in Business Administration from ESADE 4 business school and a Master of Public Finance from Harvard University. He was awarded by the European Institute of Public Administration, located in Maastricht, with the top EPSA 2009 award as the best model for Leadership and Change Management in Europe, based on the Politics and Management Deal concept. His publications include Political Trust: Politics and Management Facing the Challenges of the XXIst Century