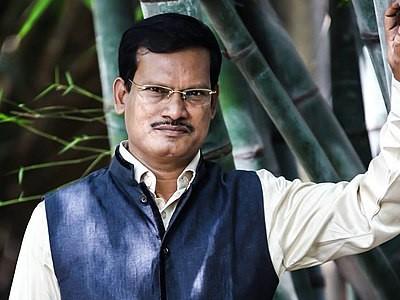 The Padman from India

From a small village in Coimbatore, India, came a ‘man’ who revolutionized the menstrual hygiene industry in India! Mr. Arunachalam Muruganantham is a household name in many villages across the country and now globally, and his name is now strongly associated with women empowerment. In a country where Menstruation is a taboo subject even amongst women, he came forward with an innovation that opened dialogues and conversations regarding the same.

He is the inventor of the world’s first Low Cost Sanitary Pad Making Machine. It all started when he found out, shortly after he was married, that his wife was using unhygienic rags during Menstruation. It appalled him and in order to find a solution, he looked for more hygienic alternatives. Since he got no support from his wife, who was too shy to even talk about it, he tried on different pads himself to check their absorption and comfort !! Today, he is called the Menstrual Man of India  aka Padman J !!

He was featured as one of Time Magazine’s 100 Influential People of the world in the year 2014 along with Mr. Barack Obama, Mr. Narendra Modi, Mr. Vladimir Putin, Mr. Pope Francis, Ms. Hillary Clinton, Mr. Jack Ma and many leaders. He has helped over a million women  adopt hygienic methods and is expected to spread over 70 countries by this year. He’s a frequent Guest Lecturer in Harvard, MIT, IIMs and IITs. He has been personally invited by Mr. Bill Gates on a seminar on ‘Challenges in Innovation’ in Seattle.

He was awarded the Padmashri by the Government of India for his relentless work for society. His biography was made as a movie called PadMan, which starred Akshay Kumar, and was highly acclaimed globally. He’s on mission to empower 10 million women. He works with women groups and self-help groups across the world. His model is ‘for’ the women, ‘by’ the women.