Permanent Representative of Ecuador to the WTO 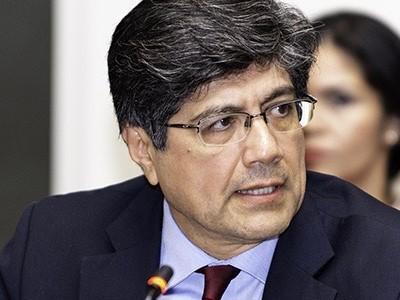 A career diplomat, Ambassador Jose Valencia (Quito, 18 February 1961) joined the Ministry of Foreign Affairs in 1982. The President of Ecuador appointed him Permanent Representative to the WTO and other economic international organizations in Geneva on 17 July 2020.

Ambassador Valencia was Minister of Foreign Affairs of Ecuador from 12 June of 2018 to 9 July 2020. Previously, Jose Valencia has been Ambassador to South Africa and observer of Ecuador to the African Union (Addis Ababa) (2010-2015), and Permanent Representative of Ecuador to the Organization of American States in Washington, DC. (January-June, 2018).

He has also held several posts in the Permanent Missions of Ecuador to the United Nations in New York (1988-1993) and Geneva (1998-2003), and within the Ministry at the Capital Headquarters including as Deputy Minister of Foreign Affairs (2008), chief of staff of the Undersecretary for Political Affairs, Director General of Human Rights, and Director General of Multilateral Affairs.

Ambassador Valencia took an extended leave of absence between 2003 and 2007 to join organizations of Ecuadorian civil society. He was Executive Director of “Participación Ciudadana” (2004-2008), a non-profit NGO promoting citizen participation in the public sphere. He served as a pro-bono lawyer at the Human Rights Clinic of the Catholic University of Ecuador.

His academic experience includes working as associate professor of Public International Law (San Francisco de Quito University), and Latin American – USA Relations (Catholic University of Quito, Ecuador). He was the academic coordinator of the International Law Program at FLACSO (Quito), where he also taught a course on International Organizations and Foreign Policy of Ecuador.

Ambassador Jose Valencia is married to Patricia Borja, an Ecuadorian career diplomat, and has three children.